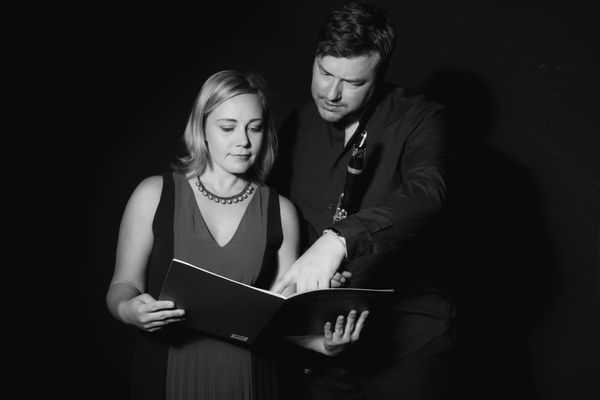 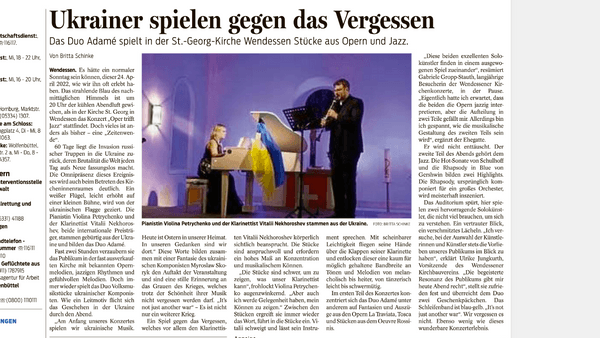 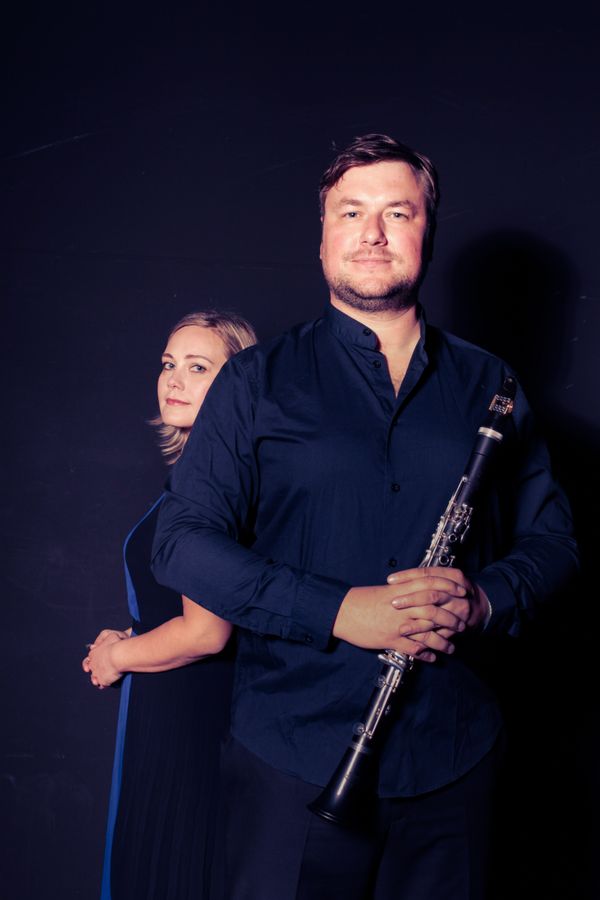 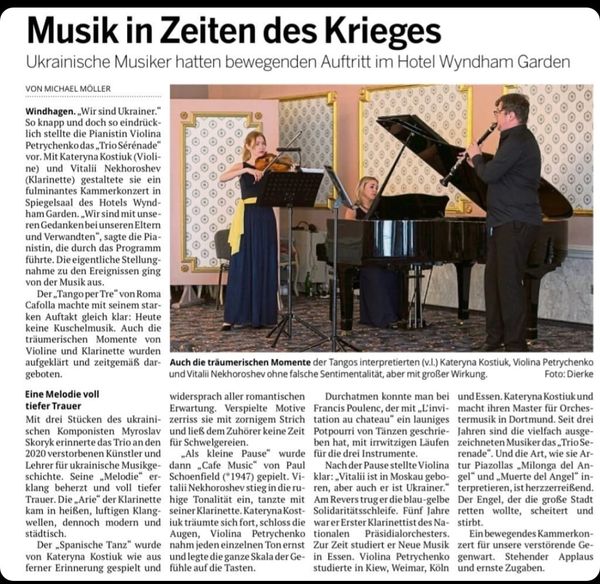 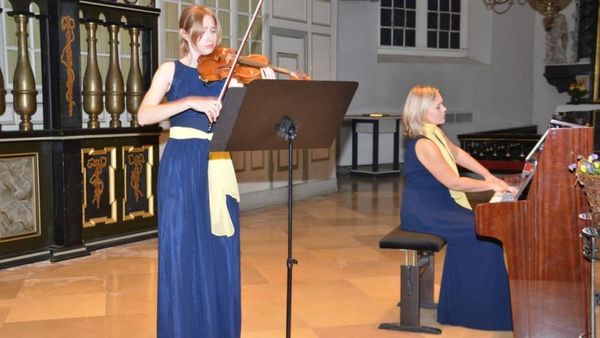 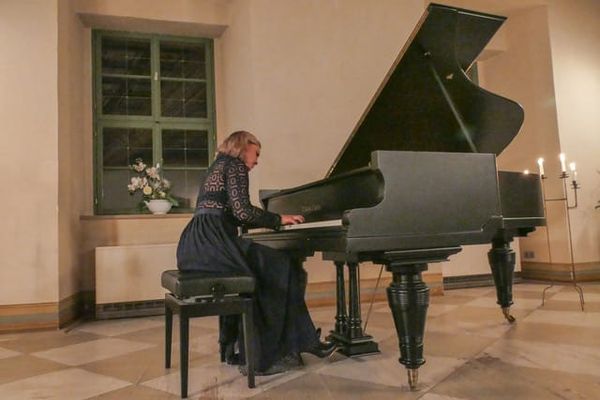 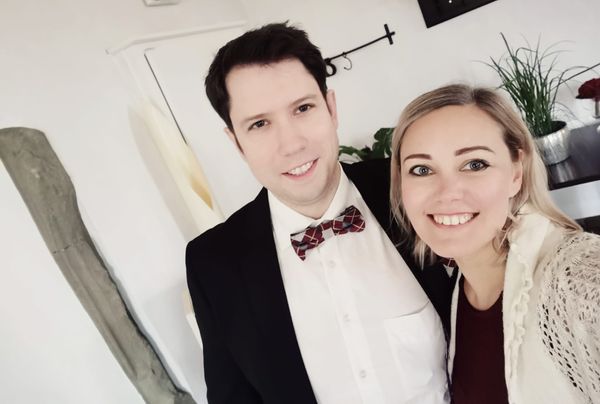 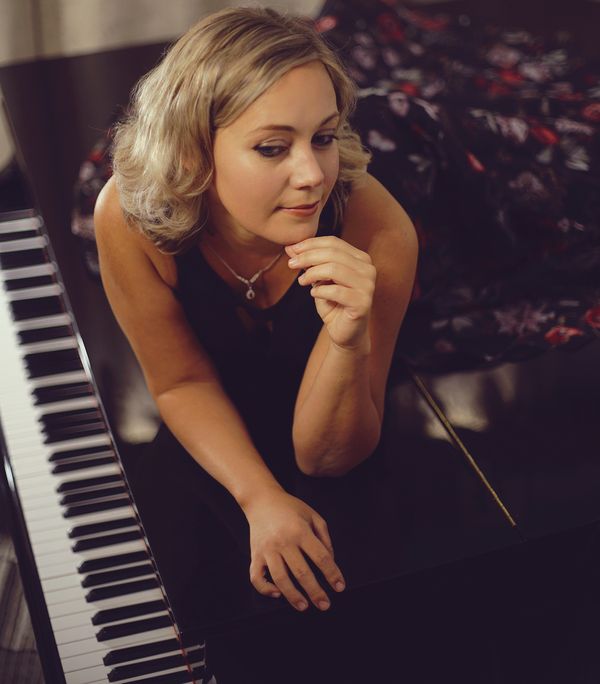 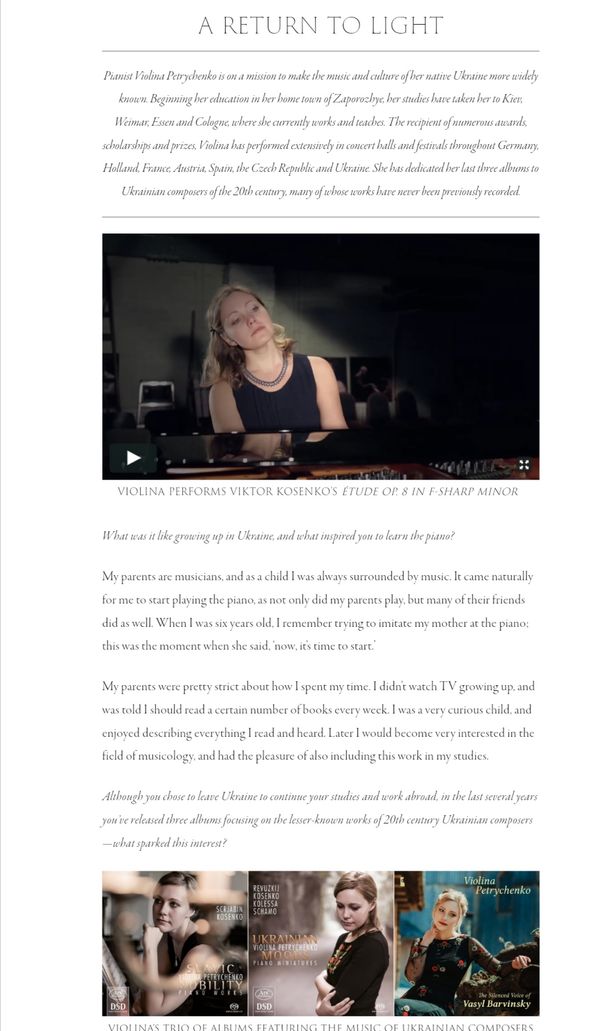 Playing Ukrainian music, for me, is like returning home for a while; delving into this world feels completely different than the music of Beethoven or even Rachmaninov. It is my goal to show the world the diversity of Ukrainian music, and that it deserves to be known, played and enjoyed.
Maintaler Zeitung
Kammermusik mit Tiefgang. Trio Sérénade beeindruckt durch künstlerische Meisterschaft 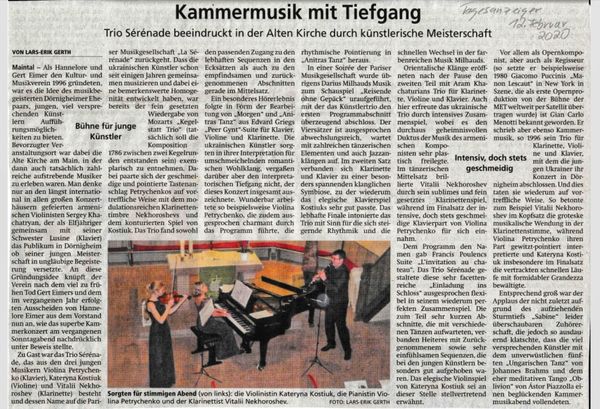 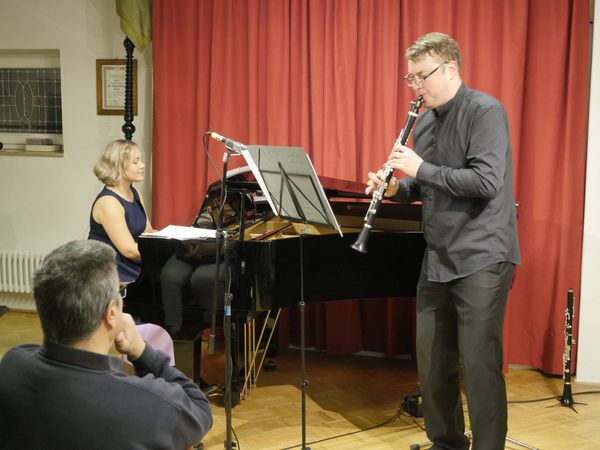 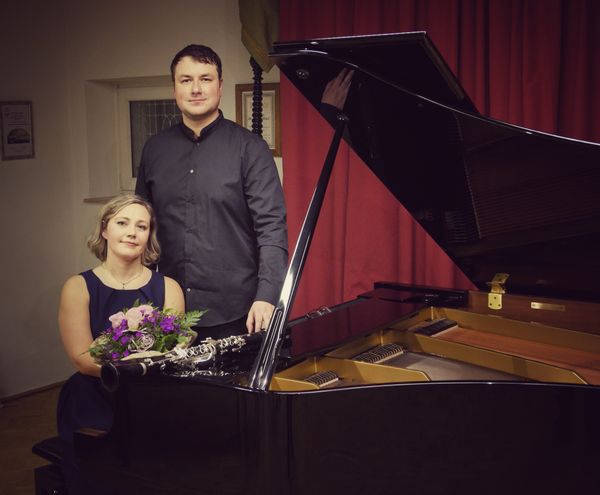 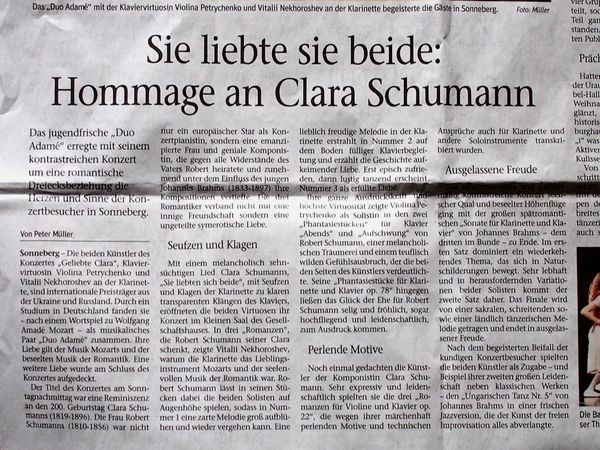 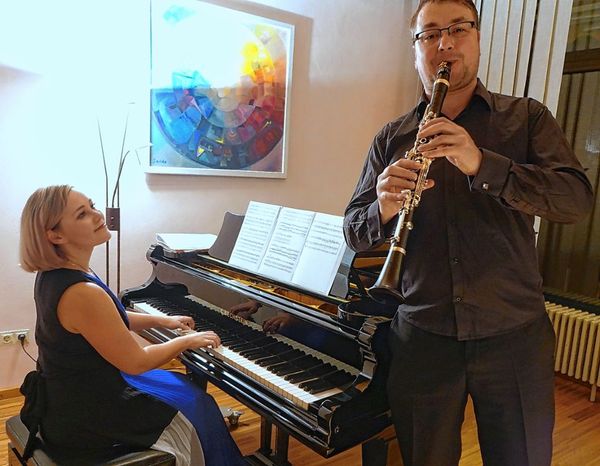 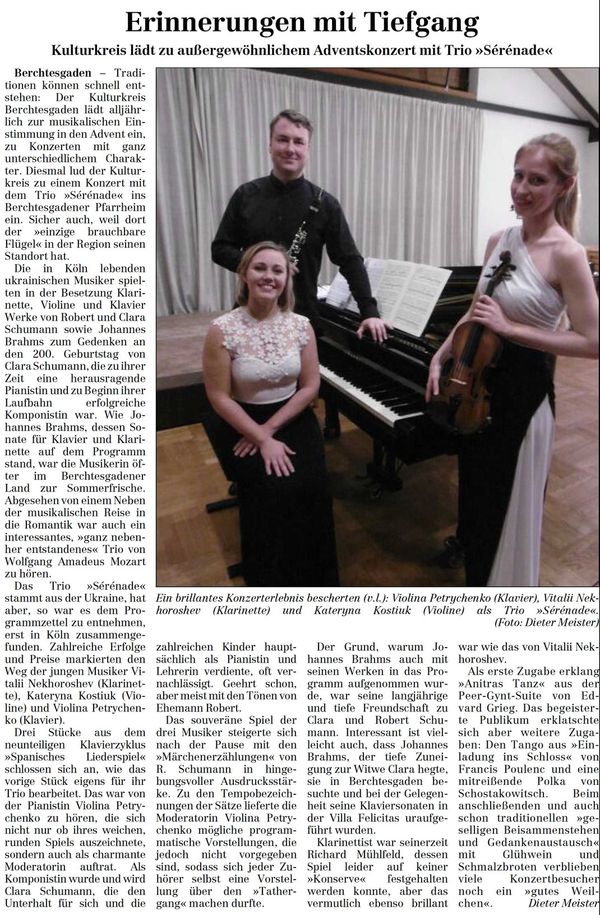 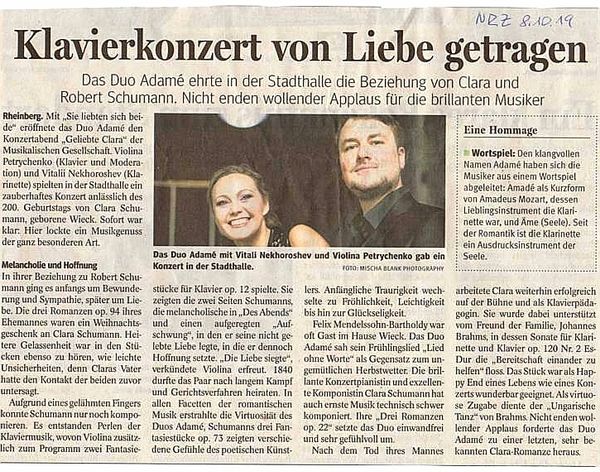 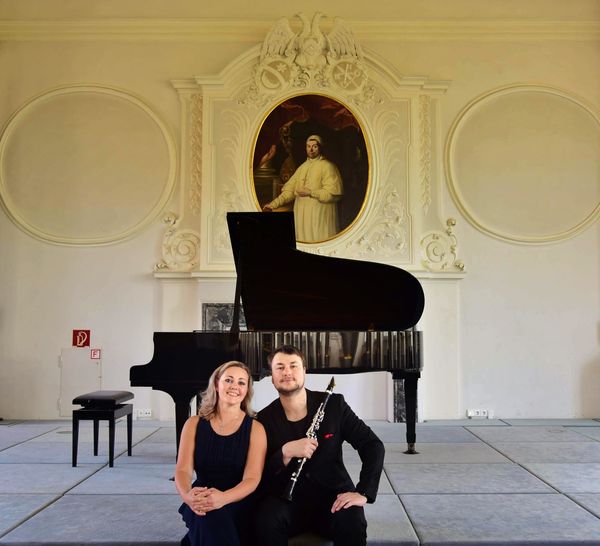 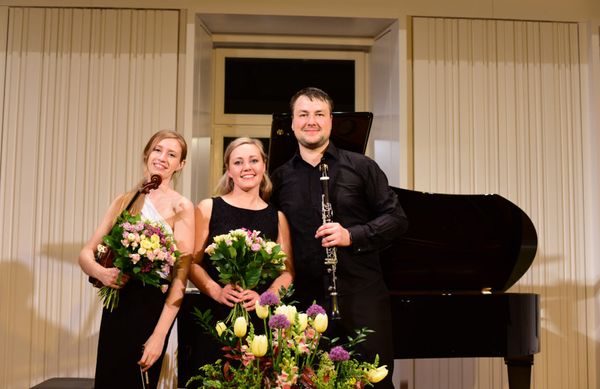 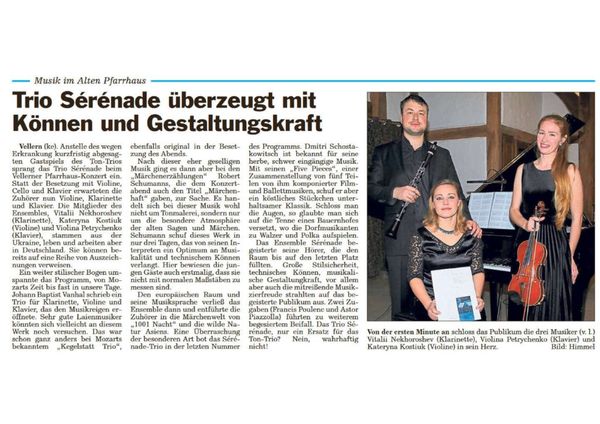 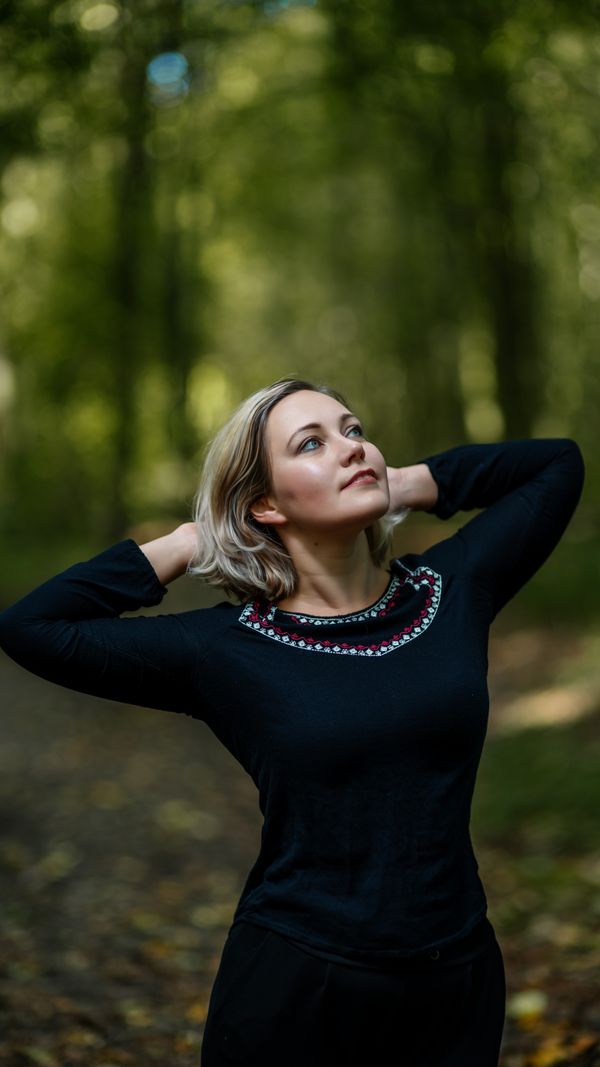 → read more
Musicweb
If Petrychenko does nothing apart from uncovering unknown music such as this, she will have done a great service not only to Ukrainian culture but to listeners everywhere and I applaud her efforts.

If Petrychenko does nothing apart from uncovering unknown music such as this, she will have done a great service not only to Ukrainian culture but to listeners everywhere and I applaud her efforts. 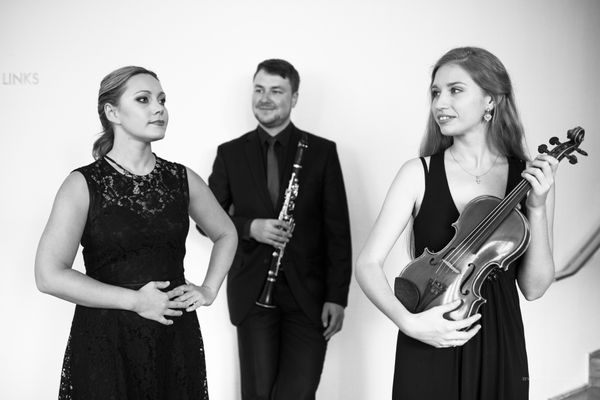 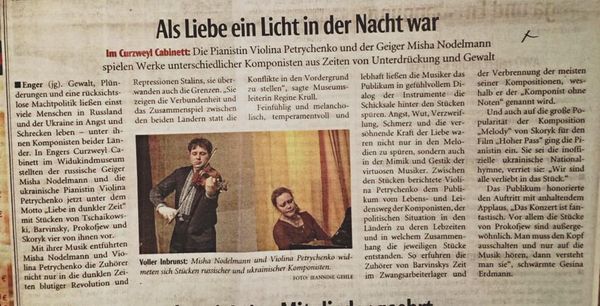 With her unobtrusive, yet clearly nationalistic musical language, Violina Petrychenko delivers a marked plea as to where Ukraine should be heading: National unity with a bridge to Western Europe...

→ read more
MusicWeb
Her touch is so perfect

Her touch is so perfect when applied to the sensitively conceived and marvellously evocative works on this disc which I thoroughly enjoyed.

a pianist with true artistic sensibilities and tremendous feeling for the music she plays. Not a note or a phrase escapes the listener’s attention; she keeps you riveted because she herself is deeply involved in music-making. She also has a rich, deep-in-the-keys tone that makes the piano almost sound like a full orchestra.

Petrychenko who has made her home in Germany is perfectly at home with all this music and plays it with both commitment and affection. The disc is very well recorded. 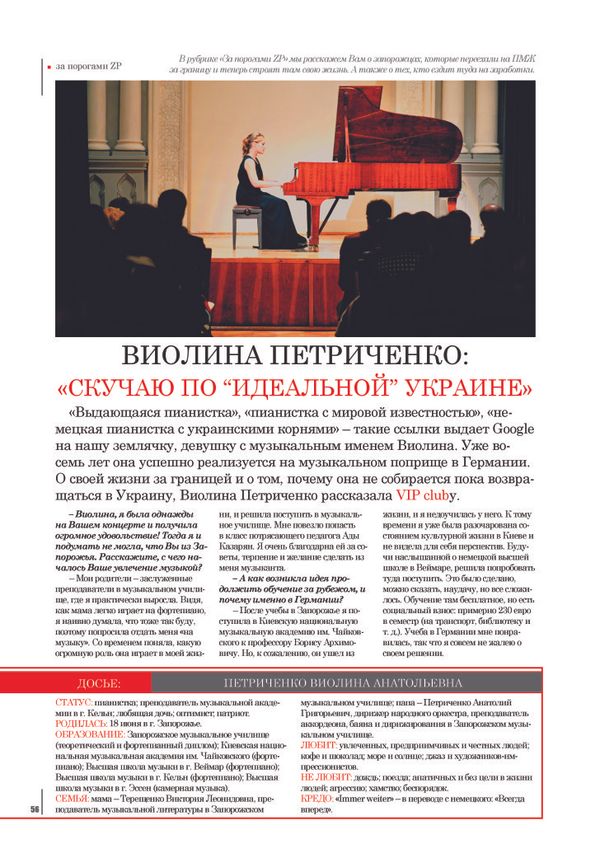 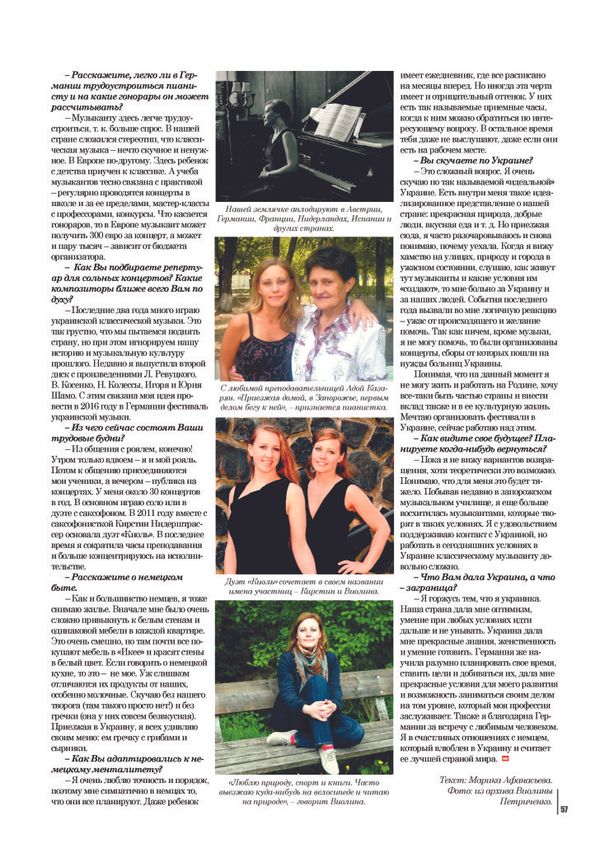 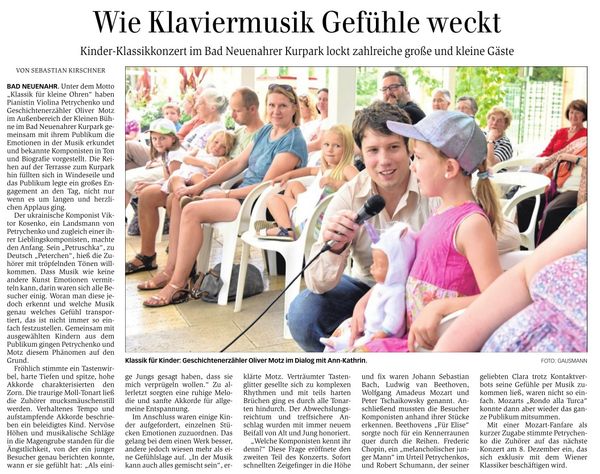 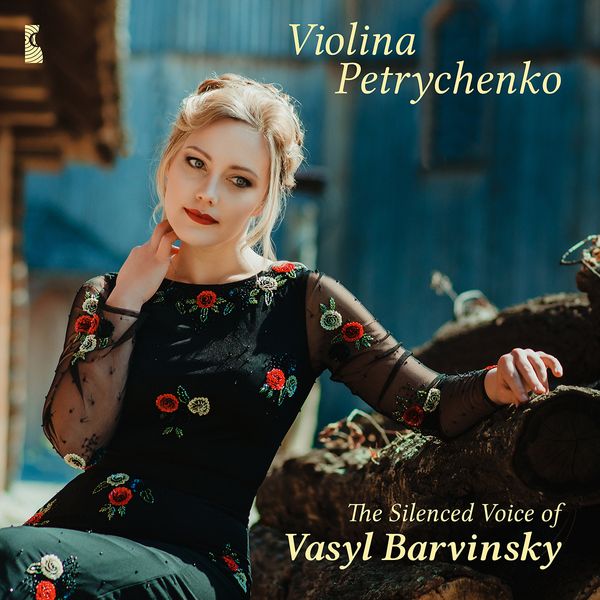 “Ukrainian Moods”, an innocently convenient title with which this young Ukrainian pianist seems to make a convincing statement. With her unobtrusive, yet clearly nationalistic musical language, Violina Petrychenko delivers a marked plea as to where Ukraine should be heading: National unity with a bridge to Western Europe. Having lived for some time in that part of the world (Kiev) I may perhaps be more susceptible to such feelings, but fact is that this oldest part of Eastern Europe (Kiev existed before Moscow), is a fractured country trying hard to become a singular and independent nation, free from external dominance. Seeking a new national identity is a logical consequence of such a desire, notably among the younger generation. “Ukrainian Moods” does very well fit this bill.

What do we know about Ukrainian composers? Very little, I’m afraid. Moreover, what is a Ukrainian composer? Reinhold Gliere, for instance, was born in Kiev, but is, at least by Moscovites (where he lived most of his life), considered to be a Russian composer. And then there is the matter of names, too. Lewko Revuzkij, as mentioned in the index, doesn’t ring a Google bell (except for this disk). Revutsky, however, does. The secret lies in the transliteration of Ukrainian versus Russian names. Other examples are Lviv/Lvov, Kharkiv/Kharkov. It remains, however, a difficult subject as we can see from the various translations in the liner notes.

Revuzkij is truly Ukrainian, but Kosenko (kossonko) was born in St. Petersburg, moving with his parents to Warsaw, Poland, after which he did spent most of his productive life in Ukraine (Zhitomir and Kharkiv, for some time the capital of Ukraine), finally getting a permanent position as piano teacher at the Lysenko Institute of Music and Drama in Kiev. Mykola Kolessa, was born in Lviv, when it was still part of the Austro-Hungarian Empire (Lemberg). It then became -once more- Polish (Lwów) until it joined in 1939, as a result of the Molotov-Ribbentrop pact, the Ukrainian People’s Republic (Lvov).

These three composers have lived through the vicissitudes of what is now Ukrainian soil, as shown in their compositional styles. The first two were not exactly innovators of any kind. Their fruits follow more or less in the footsteps of Scriabin; for further artistic development was hardly any room due to Soviet cultural control. Musical fare thus remained mostly traditional, with lyrical elements based on folk melodies, and cleverly interwoven into a Slavo-Germanic mould, whereby some of Kosenko’s output shares elements of Franz Liszt’s romantic piano style. These comparisons do not aim at diminishing their craftsmanship in any way, but are meant to serve those who want to know more about these Ukrainian composers. Mykola Kolessa’s oeuvre is primarily shaped by his diverse background. Educated in Austro-Hungarian Empire, with follow-on studies in Prague, a mixture of influences has had a bearing on his compositional output. His ‘Hutsulian Images’ leans heavily on Hungarian modernism, similar to Bartók’s folk music. However, in his exceptionally long life span (1903-2006) his contribution to what may be regarded as Ukrainian music, is nonetheless remarkable.

Turning to a more recent era, Ihor (Igor) Shamo was one of the most popular modern Ukrainian composers. Many of his songs ‘for the people’ are still high on the, mostly sentimental, hit list. But in his ‘Ukrainian Suite’, he demonstrates his real talent. For me this suite, together with excerpts of ‘The Twelve Preludes’, give evidence of ‘the real thing’ forming the best part and most solid fundament of the recital.

Jurii (Yuri or Yury) Schamo (indeed, the son of the Igor) remains for many some sort of enigma. Few compositions are to be found on the internet, although he has, apparently, been active in various kinds of music, written a large number of piano sonatas and a huge load of music for the accordeon. Perhaps, as Vilolina Petrychenko explains in her notes, that he, towards the end of his (short) life, was already so gravely ill that a number of his later brain children never made it to a publisher. Be that as it may, it was him who gave her the idea of ‘Ukrainian Moods’, which, as her chosen programme unfolds, seems to have been built on two pillars: Underlining the existence of a common, Ukrainian folk tradition on the one hand, while forging on the other a musical link with Western European music, such as embodied in Jurii Schamo’s ‘Carpathian Phantasy’. She succeeds, as far as I’m concerned, on both counts.

Ukraine has given us many famous pianists, like (in alphabetical order) Brailowski, Cherkassky, Gillels, Horowitz, Moiseiwitsch, Svatoslav Richter, and not to forget: Markiyan Matse, who audaciously played the piano in front of the riot police in Kiev (December 2013) during the Maidan uprising. But there are more, and Vilolina Petrychenko belongs to such a select and upcoming generation of talented Ukrainian pianists.

As I tried to explain before, Ukraine still is a fractured state, but Violina Petrychenko, with her obvious musical flair does not only greatly contribute to bringing about a sense of Ukrainian unity, but does so as well by appealing, in a wider context, for recognition of Ukrainian national identity. And not just musically, but emotionally as well, as she concludes in het notes: “I hope that the music of Ukrainian composers will find an echo in the hearts of European listeners…”

The piano sound is very natural thanks to ARS-Produktion's recording team. The liner notes are more than worth your time.