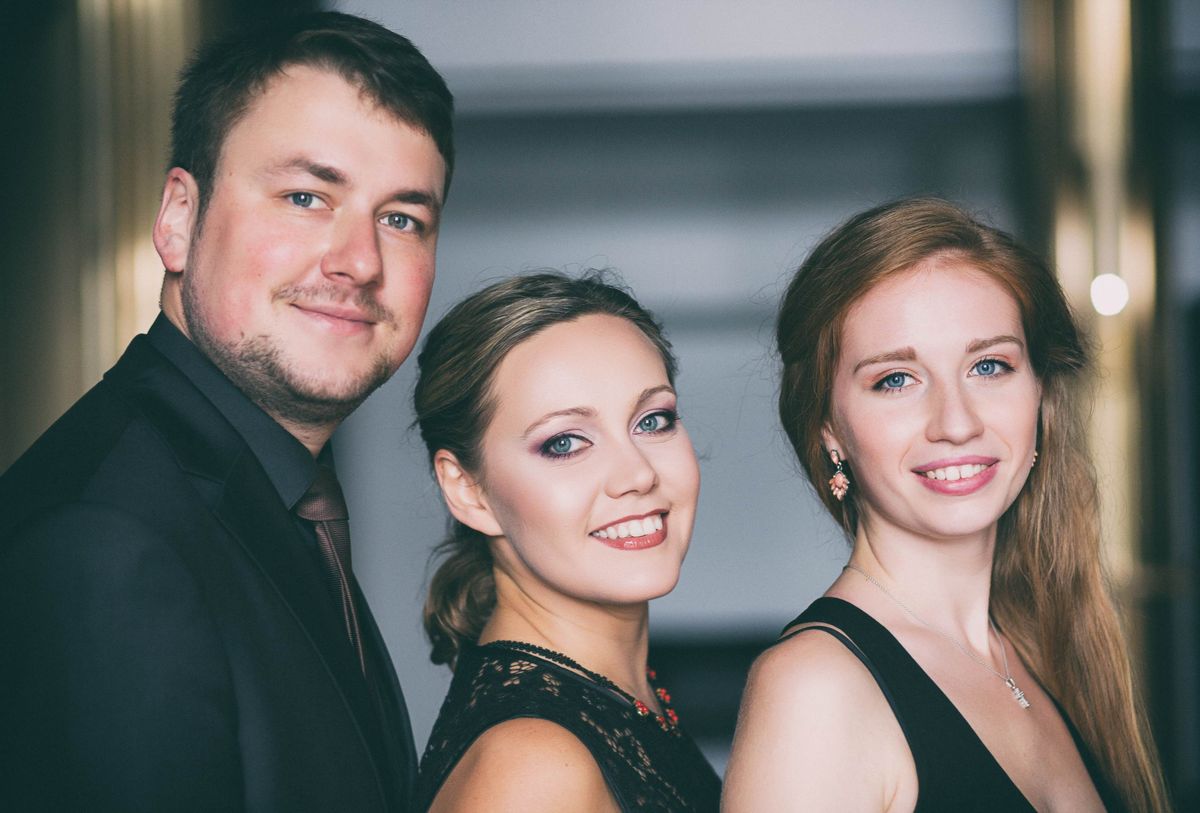 Kateryna, Violina and Vitalii are from Ukraine but formed their trio in Germany, where they were continuing their studies. Violina studied in Weimar, Cologne and Essen (solo and chamber music), Kateryna in Cologne (orchestra playing) and Vitalii followed his passion and studied Neue Musik in Essen. The three met in Cologne, where they also live and rehearse. On the one hand, they are active as soloists and each pursue their own individual style, and yet they complement each other and form a close ensemble.  These three young musicians are constantly searching for the new tones and nuances offered by this special ensemble. They enchant their audience with their sound, humour and musical diversity.

Their intriguing repertoire combines traditional chamber music works with challenging and interesting contemporary pieces. They have been playing together for three years and have already gained an excellent reputation in the chamber music scene. In 2019 they received as a trio a concert scholarship from the Werner Richard - Dr. Carl Dörken Stiftung.

Kateryna Kostiuk (violin) is originally from Kiev, where she gained her first experience on the violin at the age of five. She spent her early years in Moscow and studied at the Hochschule für Musik und Tanz Köln from 2014. Since completing her bachelor's degree, she is currently pursuing her master's degree in orchestral playing at the Orchesterzentrum Dortmund.

Since 2013 she has been active in various youth orchestras, including as concertmaster at the International Junge Orchesterakademie in Germany (2015). She plays a lot of chamber music and formed the Trio Sérénade with colleagues in 2015. Since then the trio has developed a lively concert schedule, and in 2019 they received a scholarship from the Werner Richard - Dr. Carl Dörken Stiftung.

Vitalii Nekhoroshev (clarinet) was born in Moscow. He completed his clarinet studies with distinction at the Tchaikovsky National Music Academy, and won first prize at the international competition "German Composers" in Kiev and the international chamber music competitions in Kiev in 2009 and 2012. From 2006 to 2009 Nekhoroshev played solo clarinet at the Nationalen Musikakademie Tschaikowsky and was first clarinettist of the Nationalen Präsidialorchesters from 2009 to 2014. He polished his education by completing the postgraduate course "New Music" at the Folkwang University of the Arts in Essen.

Violina Petrychenko (piano) has received numerous awards, scholarships and prizes for her sensitive playing, including from the Klassik Stiftung Weimar, the Anna Ruths-Stiftung in Cologne and the Werner Richard - Dr. Carl Dörken Stiftung. She has also been awarded the Folkwang Prize and received the audience prize in the Medenus competition.